I started The Sleep Series a few months back with my first interviewee, Brittany, mom to Tripp. It was a great success for our new moms looking to figure out the sleep game. (Can I call it that? ‘Cause, it kind of feels like that.)

In the spirit of continuing on with great advice from moms who have found successful schedules that work for their families, I have interviewed my sister-in-law Ellen, mom to Cate and Claire, almost five, and Jack, 18-months.

If anyone has it down, Ellen has it down. She knew she needed a schedule for her own health but has seen how beneficial it has been for her kids.

Below, she shares her method, insights and advice. 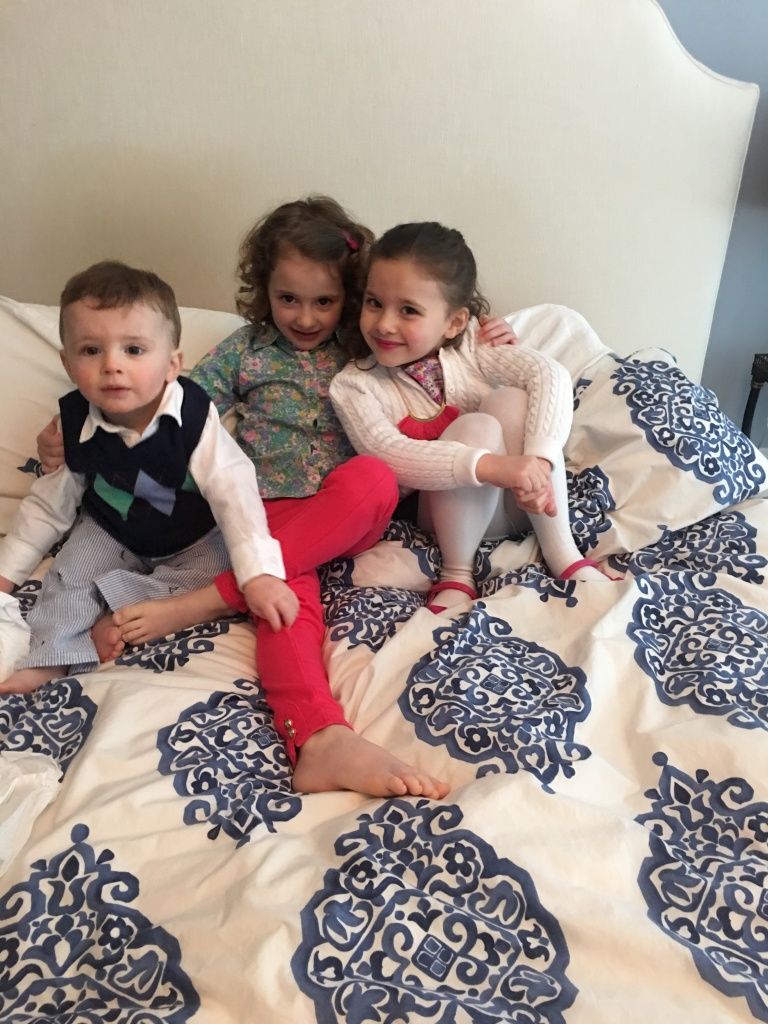 At what age was your baby when you decided to start a sleep schedule with them?

With the girls I think they were five or six weeks. Jack I started at about two weeks because I knew from the girls that it’s best to start young.

What method/schedule did you use?

I read “On Becoming Baby Wise: Giving Your Infant the Gift of Nighttime Sleep,” by Dr. Gary Ezzo and Robert Buckman because a friend of mine who had had twins before me recommended that I read it and follow it. The book is certainly not about letting your baby cry-it-out – I could never do that! It’s about getting your baby on schedule so she knows what to expect! I do believe that babies crave routine so this book made sense for me – “Eat, activity time, THEN SLEEP.” It also talked a lot about how overtired babies fight sleep so this book gave nice parameters like not letting babies fall asleep on the boob, getting full meals (not little milk snacks throughout the day) and putting the baby to sleep while he or she is still awake – tired but not too tired. 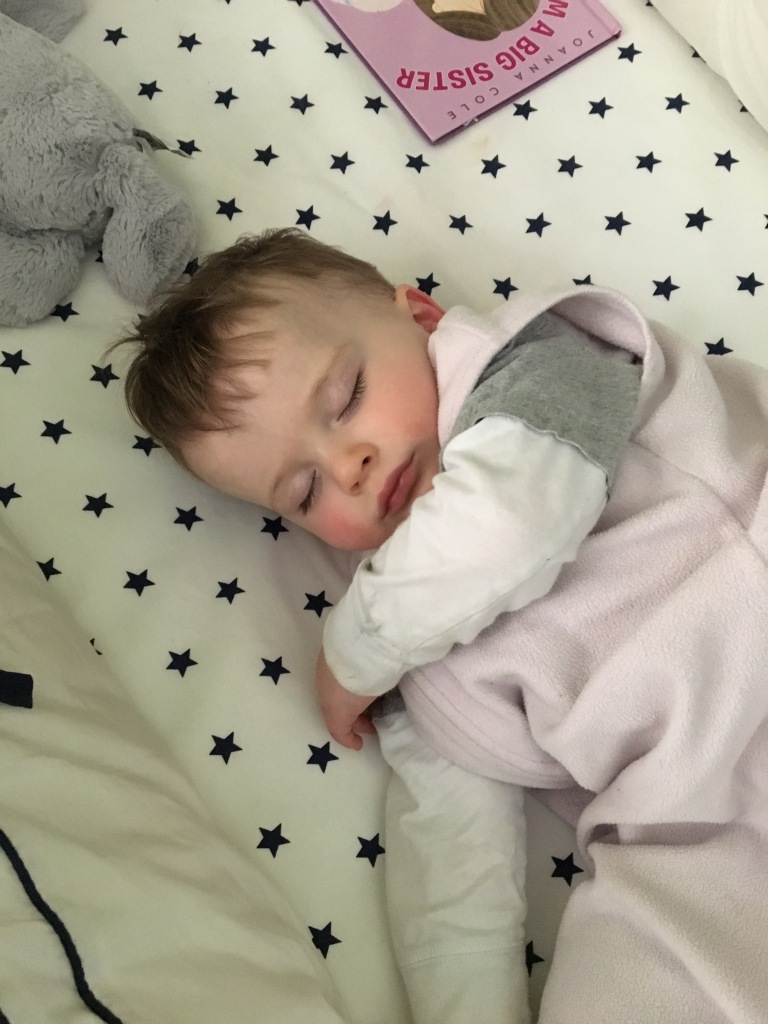 Had anyone given you advice on what to try or had you read about a certain method that you wanted to try?

When I had the girls, I just was so scared. I had never been a mother and then I was one, times two! My twin-mom friend was pretty adamant about Babywise so that is why I picked it up and read it. I wanted to know what to expect during the day and this book helped me do that. [The girls] got on such a schedule that I knew when it was nap time so I could scoot out for a quick errand and be back by the next feed.

I am also a total lunatic if I don’t get my sleep – I know everyone needs sleep but some people are better than others at functioning without it – I needed to get those kiddos sleeping through the night so that I could regain my sanity.

I believe strongly that by following this schedule as babies it has really set my kids up for better sleep habits in general. When my kids are sick they still sleep through the night – they are simply good sleepers. Maybe I got lucky but I think it’s because I established it from the get go. I have so many friends who say that their kids are up all night, in and out of their rooms, and that they just cannot get settled or fall asleep and stay asleep. My kids are just good sleepers and I am grateful for that! Jack now, at 18 months, sleeps from 8 p.m. to 6:30 a.m. every evening with two naps a day and the girls, at almost 5 years, sleep from 8 p.m. to 7 a.m. every night.

What were the challenges along the way? What was hard about it? Were there times you thought it wasn’t working and wanted to cry (!)

The hardest thing about this plan I guess is that obviously kids change and grow and need less sleep as time goes on – so sometimes (especially with the girls – I am able to roll with things a little better with Jack) when the kids change the schedule I am like, “Huh?? What do I do??” It takes me a while to adjust to the new routine!!  Like right now at 18 months Jack is still on two naps a day but he is transitioning to one nap a day – sometimes he still needs two and other days he just needs one – so for me the hardest part is giving up the control and the, “This is the schedule,” – OCD mentality.

Ok, so, here is the one thing I want to know from moms who are able to get their babies on a sleep schedule – what about that moment when you lay your baby in his or her crib? What is recommended in the book? Let’s say you have a young infant and you feed them, play and then go down for a nap – do you lay them directly in bed and what if they do fuss or what if they do cry? What is recommended in terms of picking them up out of bed? How did you deal with this? I think this is the hardest thing for parents to figure out – what do I do when my baby doesn’t want to fall asleep?!

The first thing I will say is that I think it is really important to start the feeding, activity, sleeping schedule as soon as you can. The book says two weeks and I know that sounds crazy to some but the earlier the better. It makes sense because the lactation consultants and pediatricians all recommend from day one in the hospital to wake your baby every 2 ½ to 3 hours to get your baby to eat – the goal is to get your milk coming in and to get the baby eating and gaining weight. You are already on a feeding schedule, so best to implement activity and sleeping now too.

So, you are waking the baby to eat – remember full meals, no snacking on the boob. You are ensuring that he or she is getting adequate caloric intake during the day so baby will be more quick to drop the middle-of-the-night feedings

Babies like routine and to know what’s coming next – so by feeding the baby then giving some activity time (visit this link on babywisemom.com which gives a nice guide on how much awake or activity time is prudent) you then put the baby down BEFORE he or she gets too overtired. That’s the key – by tuning into that you avoid the whole my baby is screaming, now what should I do dilemma?

The baby might fuss for a minute but then, asleep! My friend Michelle, before implementing this schedule, said that her new baby was crying for like an hour before falling asleep and then would wake up like 30 minutes later crying again! Omg! No! Well-rested babies wake up happy and cooing. I BET MY LIFE ON IT!! Overtired babies fight sleep – they simply can’t settle themselves. By finding the sweet spot of, my child is starting to show signs of being tired BUT isn’t yet overtired and then swaddling the baby and off to bed AWAKE, the child learns to fall asleep on his or own and learns a lifetime of healthy sleep habits

Now, of course sometimes you misjudge your baby’s tired level and the baby is crying hard – I always hold and soothe as needed during those rocky times but I am always aware of the schedule and make adjustments accordingly. So, during the next eat, activity, sleep schedule period I will give a real quick activity time and then down sooner because I knew that last time around they didn’t sleep well

Does that make sense? The goal is to be on track 80-85 percent of the time so that for the most part baby is happy and rested and can get to sleep on his or her own. The other times you comfort but stay mindful that some adjustments will need to be made to the day so it doesn’t turn into a nightmare. 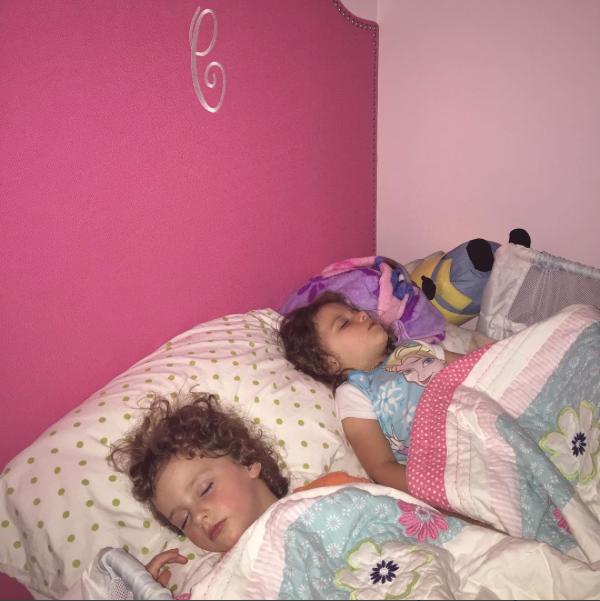 What would you do when things such as traveling, colds, shots changed things? (i.e woke your babies up in the middle of the night!) Would you find that they could get back onto their schedule pretty quickly?

When we travel, that was the hardest part but I would try to stick to the schedule even when on the road. Stopping when it was a scheduled time to eat, etc. The book talks about traveling, growth spurts, shots, sickness etc. and stresses to just get back on the routine as soon as that little hiccup has passed. Generally after three days it was all back to normal!!

In terms of nursing, how did you work out dropping feedings, especially the nighttime feedings? At what age did you start doing this?

As far as nursing, I knew that the baby was ready to drop a feed when he or she just had no interest in eating – it was like I was forcing the boob on them! With the 2 1/2 or 3 hour feeding schedule and because I was making sure the baby was awake and taking full feeds (not snacking) I knew that they were really getting enough, so when it seemed like I was forcing it a few times, I felt confident that they were ready to drop or lengthen times out between feeds.

Would you try the same method with your next baby? [In your case – did you modify anything for Jack that you thought didn’t work with Cate and Claire?]

I definitely would do this with a fourth baby – no questions asked! With the asterisk that you don’t have to be so strict about the schedule that you become a lunatic about it! Lol!

[That was] the only disadvantage for me – the 20 percent of the time when life or kids would throw you a curve ball and my kind-of hesitation in just rolling with it better.

But, I liked that I knew what to expect and when I could sneak out for a bit – this really helped with nursing. The kids were so scheduled I could be out and say, “I know the kids will sleep until 1:00 p.m.,” so I could run my errands and get back when it was feeding time – that was the biggest advantage. Just a nice routine to the day.