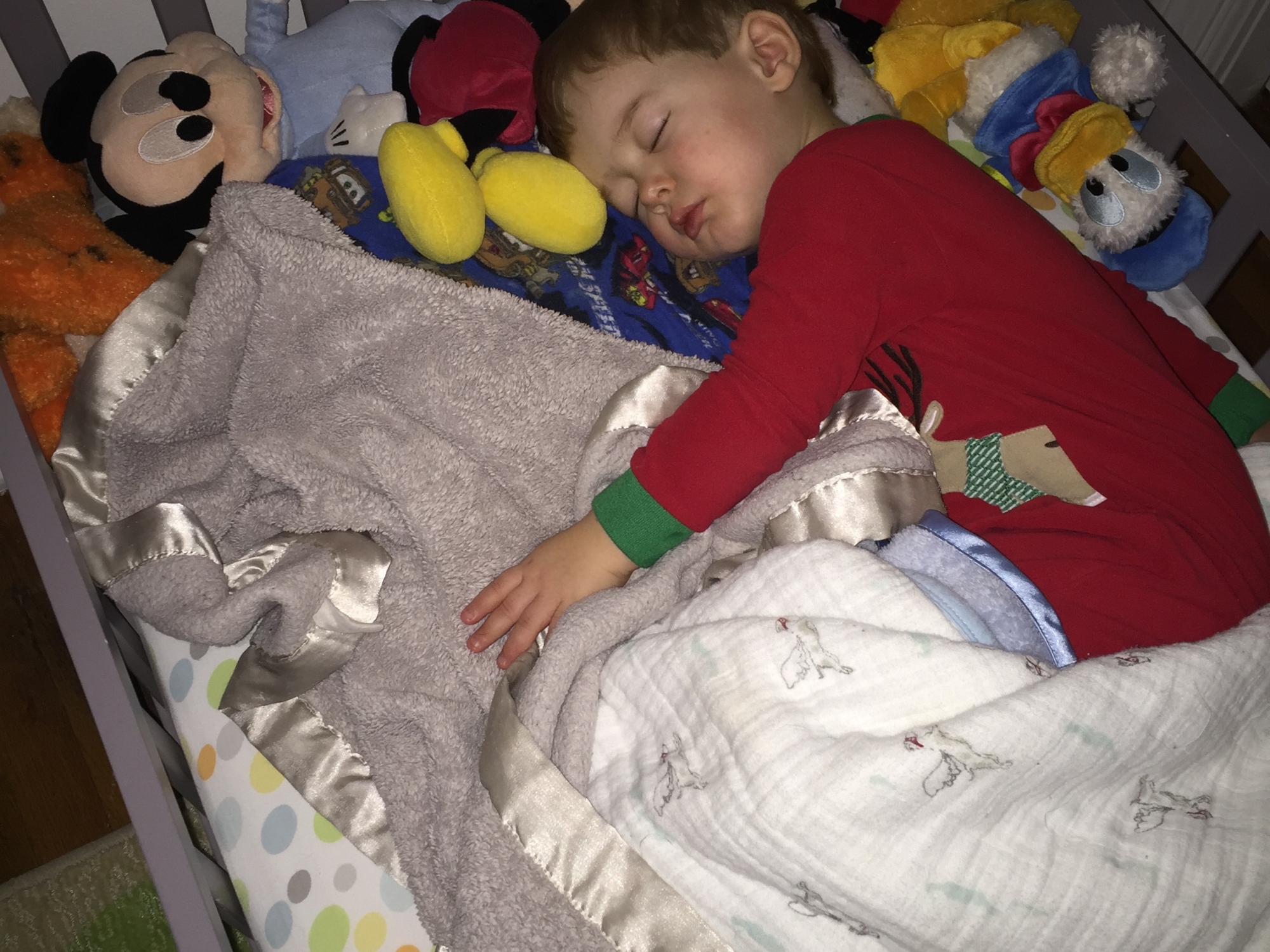 Because, really, what is the number one topic with babies? Like, between parents, between strangers and parents, between doctors and parents – “How is she or he sleeping?” And, it feels like there are these mythical creatures out there who get their babies sleeping through the night. (This can mean a lot of things but at least five hours when they are wee ones up to 12-14 hours when they are toddlers.) And that is like being given the golden key to the city of sanity.

I don’t know if it’s who I am, if it’s because we moved when Rad was 12 months, or if it’s because we traveled a lot during the first year that Rad was born, but we were a little more carefree with our schedule. And yet, it worked for us. Until it didn’t. (This is a maxim you’ll often hear parents say. We know we are creating the bad habits but it feels so good in that moment to get sleep!)

The advice I keep coming back to when it comes to sleep is to do what works for you. You can read our post about sleep from a few months back – it doesn’t talk over a schedule (because, well, it didn’t exist) rather the post offers thoughts and suggestions, ending with one thing we knew for sure, our favourite lullaby. But, I found I struggled with writing that post because I wasn’t completely sure what I wanted to say. I was not one of those parents with a baby who slept through the night and I wasn’t sure what I wanted to do about it or if I even wanted to do anything about it yet. Our pediatrician had night-weaned her daughter at 16 months so I felt I had plenty of time.

But, that’s really all the advice I have, finding what you are comfortable with. And, if I have no advice for you (and, beyond that, in the last couple of months when Rad would no longer feed when he woke at 3 a.m. but scream instead, I knew I too needed advice) I thought I would go out into the world of proper sleep and find these women and men who were sending postcards from their vacations in dreamland.

Because sleep for parents does exist – it’s just, how? This new column, The Sleep Series, will be a set of interviews with parents who have found success in a particular schedule and are sharing their sleep savvy with us in detail. My hope is that readers will get to read a variety of methods from real, in-the-moment parents, and hopefully happen upon something that seems to fit their family’s style just right.

Our first parent in the series is Brittany Resh, a friend of mine from Ohio who has a two-year-old, cute-as-a-button little guy named Tripp. Brittany and I were at a wedding back in October together and over dinner I mentioned Rad’s nighttime waking and nursing and with wide eyes she declared, “You need to nip that in the bud!” I knew the moment that I had questions about sleep, she would be one of the girls I would turn to.

At what age was Tripp when you decided to start a sleep schedule with him?

Tripp was six weeks old when we started our nighttime schedule then around four months or so for naps.

What method/schedule did you use?

For nighttime I started a bedtime routine. I put him in his crib for the first time and swaddled him. For my routine I did bath, feed, then crib. The first week was rough and I was about to give up but I stuck with it. Everything I read or was told said that babies thrive on schedule. I still slept in the room with him. I wasn’t ready to be away. As the weeks went on, he started sleeping for longer periods.

For naps, I had a much harder time. He for some reason hated his crib for naps. So I did the cry-it-out method. I spoke with my doctor just to make sure that it was okay. I know people have lots of options on that method. Crying it out did not bother me. I knew what I wanted my end result to be and that was a sleeping baby. Tripp, you had to just let him cry. No going in the room to comfort him – that made it worse. We had good days and bad days. Sometimes is took minutes then other days it took 45 minutes. But I stuck with it. And he soothed himself to sleep.

Had anyone given you advice on what to try or had you read about a certain method that you wanted to try?

I have a few that stick in my head. My mother said, “Put him in the crib,” and that’s when I started everything.

A girlfriend of mine sent me this book, “Secrets of the Baby Whisperer”. It was 100% helpful. I read the parts on getting your baby to sleep. What I learned most was that babies have different cries for different needs. Listen close to the cries. Boy did this help!

What were the challenges along the way? What was hard about it? (Were there times you thought it wasn’t working and wanted to cry? (!))

YES!! The lack of sleep and not understanding WHY isn’t my baby sleeping. It was during the first week when I started the nighttime routine and we had those bad nights that I wanted to give up. But I told myself, Stick with it, babies do so well with some sort of schedule. Glad I stayed with it.

For my household, honestly the schedule/routine is what works best for us. Tripp thrives on it. He knows what to expect in his day. Yes, there are days when we have to make adjustments but all in all it’s the routine. If you think about it, we as adults have everyday routines – why wouldn’t a baby?

Yes, clear as day because I was so excited! I think Tripp was seven or eight weeks old and he slept for five hours. It’s amazing what a full five hours does to you!! Now, a full night’s rest came gradually. He would go longer and longer through the night. But pretty sure he was four or five months old, although I don’t remember for sure.

Did you find that you had to modify your plan along the way at all to work for you and Tripp?

Maybe here or there. As he got closer to two he maybe goes to bed a little later.

In terms of nursing, how did you work out dropping feedings, especially the nighttime feedings? At what age did you start doing this?

Nighttime feeds Tripp did that all on his own. As he slept longer there was no need to wake him. There was a point when I realized – I think it was the 5 a.m. feed – that he didn’t really want the milk, just me. So I would rock him instead of feed. He would go back to sleep. He would sleep an hour or so longer. After awhile I wouldn’t go to him and he self-soothed himself back to sleep.

Dropping feeds in general was harder on me than him. He had no problem. He didn’t really care. But I took my time. I started around 10 1/2 months. I would drop one feed every two weeks. I wanted to give my body and hormones enough time to adjust. I had saved up on pumped breast milk for this purpose. My doctor told me that I could mix whole milk and my milk to help my weaning at nine months but I waited until 10 1/2. I started with the afternoon feeds and went on from there. My last two were nighttime and morning. When I got down to just one feed I waited about two weeks, letting myself mentally prepare for this amazing bonding experience to end. Tripp must have known it was the last feed because it was perfect. He looked up at me with the most precious smile and giggled a little and latched. It was perfect in my eyes. Tripp was 13-months-old when that relationship ended. It took me two months.

What would you do when things such as traveling, colds, shots changed things? (i.e woke Tripp up in the middle of the night!) Would you find that he could get back onto his schedule pretty quickly?

Traveling: I really try to stick with the same schedule as much as possible. If we need to drive for several hours I would try to do that during nap hours. But if that couldn’t happen I would just go with it. If there’s a day he doesn’t get a nap he usually makes it up the next day with sleeping-in or napping longer.

Colds & Shots: They don’t really affect Tripp. He may wake at night because he needs me or wants me, but I keep him in bed and tend to him there.

I find that Tripp or kids in general thrive on a schedule so, yes, he easily gets right back at it if he’s off at all.

Would you try the same method with your next baby?

Yes, 100%. My Tripp is a really good sleeper. Not sure if it’s what I did or if he just likes sleep. But I would stick with what I did for sure or at least try again.

What is Tripp’s sleep schedule like now, at age 2?

Pretty much the same – milk, bath most nights, bedtime a little after. He goes down around 7:30 p.m. and sleeps until between 6 a.m. – 7 a.m. The only thing that has significantly changed is that I transitioned him into a “big boy bed” for nighttime. And for naps he takes only one – down at noon and sleeps around three to four hours.

Anything else to add?

I have to say that breastfeeding my Tripp for 13 months was the best achievement in my life. Besides giving birth this is the most rewarding but challenging thing I’ve ever done. I have never been more proud of myself. And you should be too! 😉 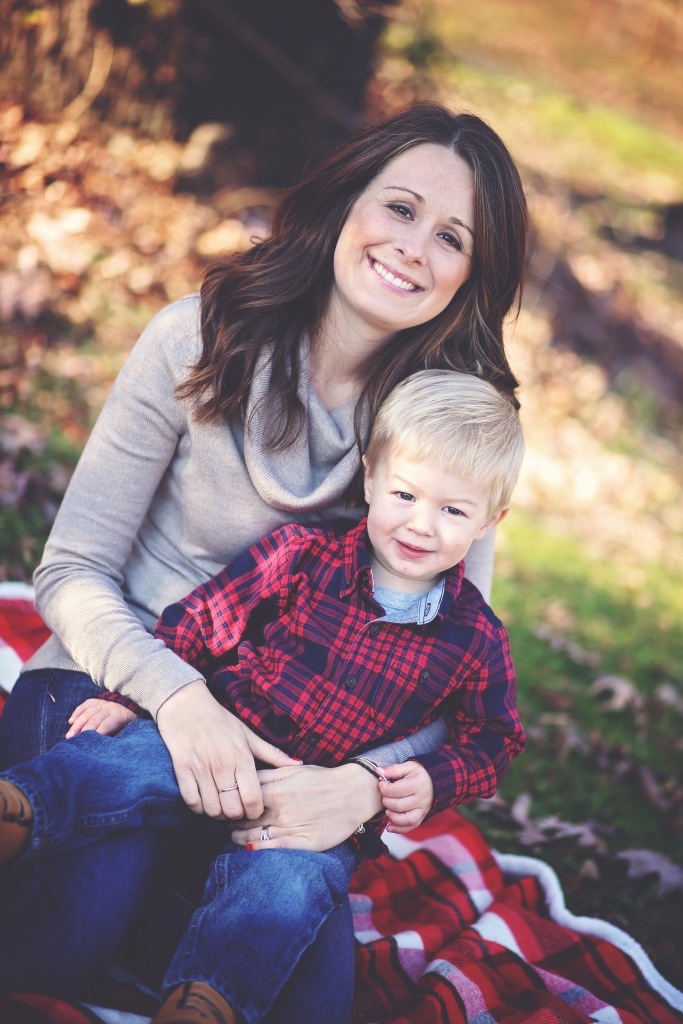 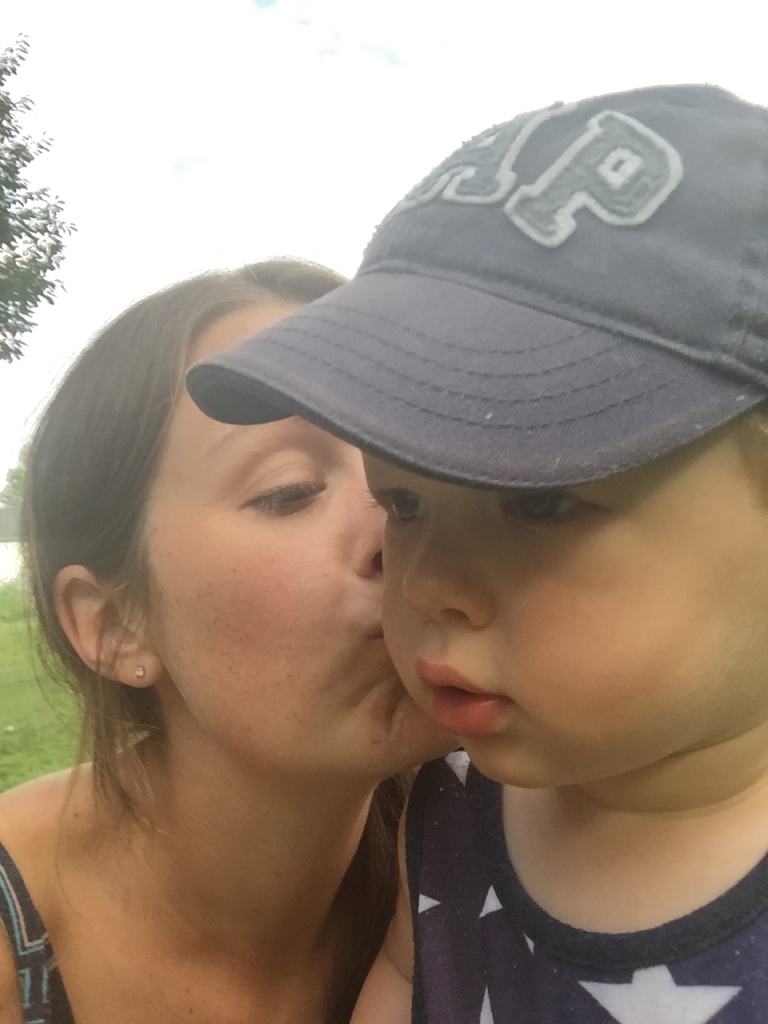 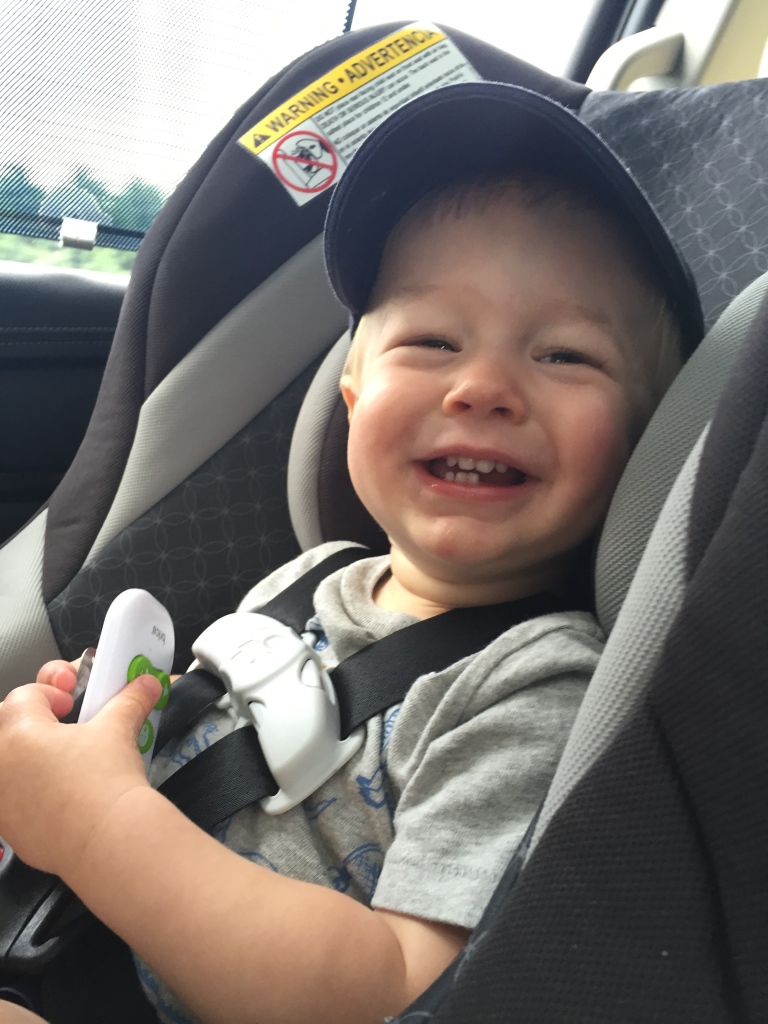 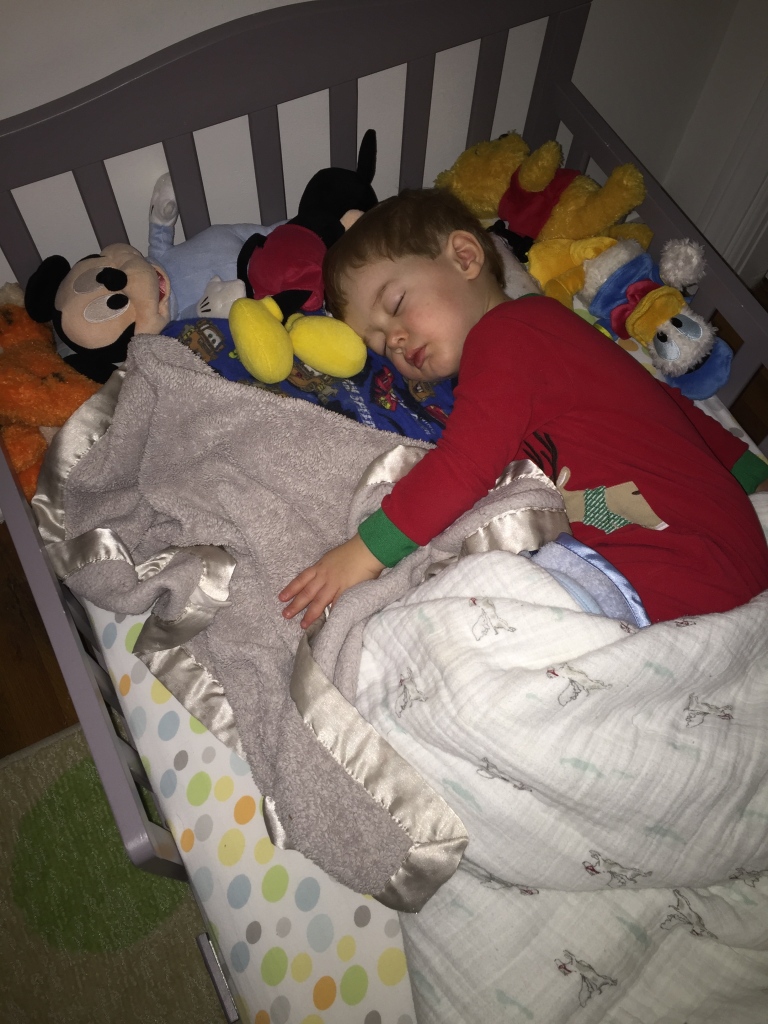 Thank you so much Brittany! I know that new moms and even moms who are onto their second baby (me!) will find this so helpful. Babies are all so different but I couldn’t agree more that a schedule is key. Readers can give your schedule a try and the detail you shared with us of what worked and how it worked will be refreshing for those moments when giving up seems like the best idea – so happy to hear from a mom who stuck it out, did what she needed to do (I would totally have needed to sleep in Rad’s room too) and got to a healthy (sleep-filled!) end result for mom and baby. You’re the best.